5.5″ Stainless Steel Salt or Pepper Pump with four authentic Indigenous designs by Northwest Coast artists. The images on the left have the title and name of the Indigenous artist.

Once folks try Kampot Pepper no other pepper will do. This travel grinder is becoming more and more popular as so many want to bring the ‘Best Pepper Ever’ with them wherever they go.

Chilkat by Bill Helin (Tsimshian) – This authentic Indigenous design is based on patterns from traditional Chilkat weaving practiced by Tlingit, Haida, Tsimshian, and other Northwest Coast peoples of Alaska and British Columbia. Chilkat blankets are worn by high-ranking tribal members on civic or ceremonial occasions, including dances.

Raven by Kelly Robinson  (Nuu-chah-nulth) -Kelly Robinson learned Nuxalk design and conventions from Nuxalk artist Alvin Mack. He began painting in 1997, and familiarized himself with Northwest Coast aesthetics. While Kelly has made a name for himself with his carving and jewellery, he has started to branch out and apply his designs to other media.  In 2012, Kelly graduated from the Freda Diesing School of Northwest Coast Art. He continued his studies under a mentorship program with Tim Paul, during which time Kelly enlightened himself with Nuu-chah-nulth stories and perfected his mask-making abilities in the Nuu-chah-nulth style. In 2019, Kelly was awarded the YVR Art Foundation Mid-Career Artist Scholarship for his contributions to Indigenous art in BC. In 2020, he won the BC Achievement Fulmer Award in First Nations Art. Many of his pieces display traditional Nuxalk design with a modern twist, such as reversing positive and negative space in places.

Raven by Connie Dickens (Tsimshian) –  Connie was born in Lax Kw’alaams (Port Simpson), BC and attended the Kitanmax School of Northwest Coast Native Art in Hazelton after graduating high school.

Connie began carving wood, but after having her three children with her husband decided to explore her artistic expression through drawing. She has since used this skill to create clothing, tableware,

Bear by Marcel Russ (Haida) – Marcel is a noted contemporary Haida artist. He was born in Queen Charlotte in 1973 to the raven clan. His work is not only traditional, but he also uses wood together with argillite to create unique, contemporary pieces. In the spring of 1999 Marcel Russ and his father exhibited at the American Museum of Natural History in New York City. He carved a 22 foot pole for the Museum of Northern BC, Prince Rupert and Helped Jim Hart with the carving of 40 foot pole for the village of Tanu. 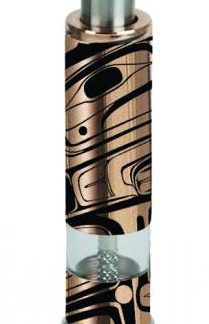